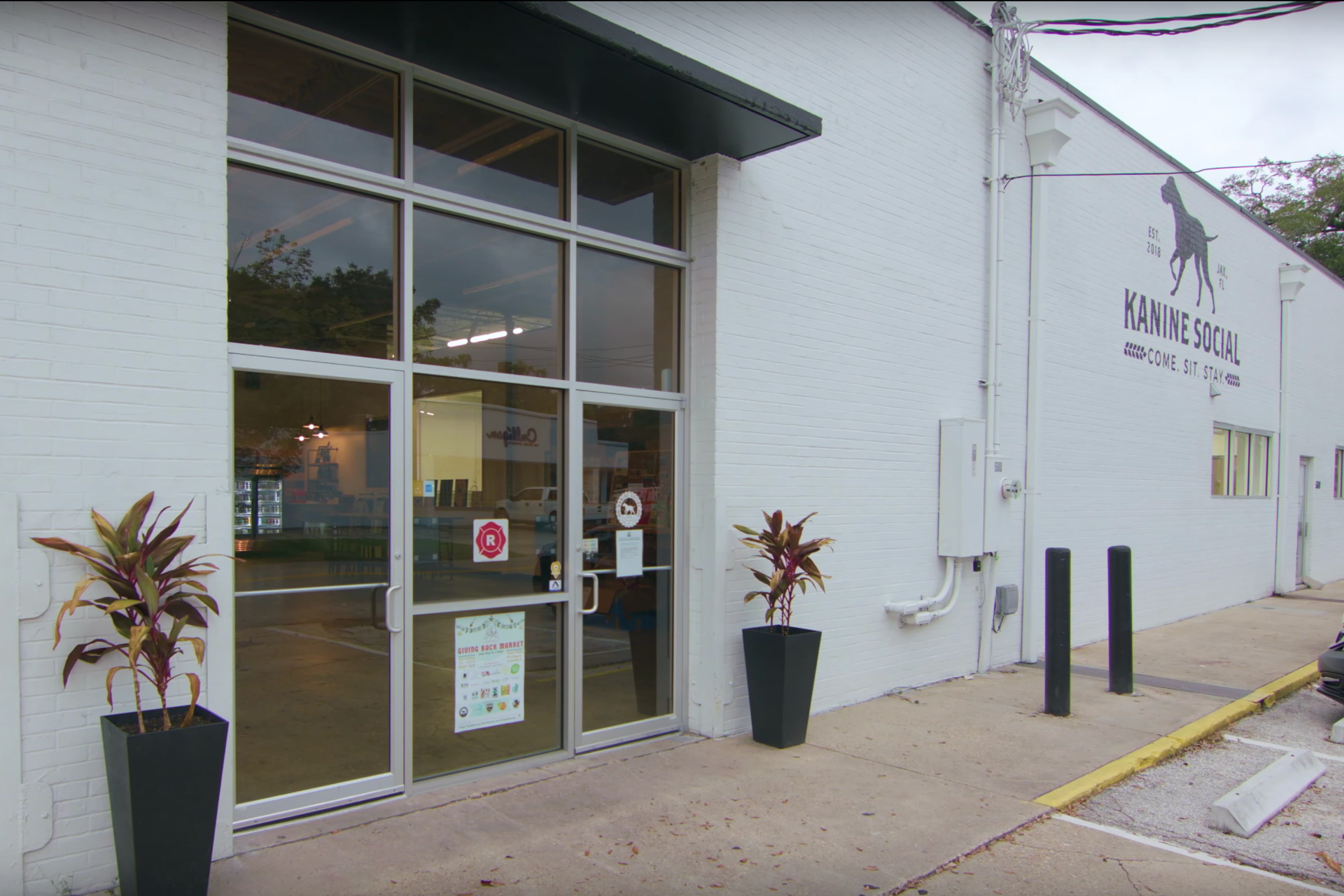 Two friends had an idea. As dog owners, Daniel Moffatt and Dustin Fries figured other dog owners would enjoy a fun place to take their dogs. The dog owners could mingle but more importantly, their dogs could socialize with other dogs.

Daniel and Dustin took their idea, along with a lot of hard work and research, to the bankers at 121 Financial. Today the two friends can proudly say, Kanine Social is the only indoor dog park in the state of Florida. The Riverside dog park and taproom enjoy a growing list of members.

“I think everybody at first was like this is crazy,” said Kanine Social Co-Owner Dustin Fries. “At the same time Daniel and I were both very passionate about it and we weren’t going to let ourselves fail.”

The two searched for almost five years for a good location. When they found an older building on Riverside’s industrial edge, they knew they’d discovered the perfect spot to build their dream. Today the 5,000 square foot building is large enough for a comfortable taproom and lots of space for dogs to play or get groomed.

“We also have TVs outside and TVs inside. So our customers are coming inside and they are enjoying a cold beverage and they don’t have to leave their dogs at home,” said Fries.

The 16 foot high ceilings and garage door walls that came with the building were extra treats. But there was a lot of work to do. The team designed a contemporary taproom bar that includes 15 local and regional craft beers. There’s also a variety of wines and plenty of non-alcoholic beverages.

Originally Kanine Social was an indoor park but now they have also developed more than 10,000 square feet of outdoor dog playing areas. And as Fries explains, this is not just any dog playing area.

“The cool thing is we have synthetic pet turf. It’s got some technology called hydro turf. So essentially if it’s 100 degrees outside the turf is cool on their paws.”

Monthly and annual memberships are available. Members get a lot of discounts for dog treats like grooming and daycare. There are also discount treats for dog owners. The only requirement is your dog must be at least four months old. Your dog must be spayed or neutered for more than six months. And every dog must be up to date on all their shots, like distemper and rabies. Dogs displaying aggressive behavior will be asked to leave.

Kanine Social members can stay up to date of special events and promotional offers through social media alerts or Facebook, Instagram or web site updates. Weekly entertainment like Bingo and Trivia are popular and that popularity is growing throughout the community.

Members like Jenifer say the dogs love Kanine Social but so does the human community. “It’s really a great concept,” she said. “I think the community, the people who come here on a regular basis feel the same way. You get to relax with your friends. I know I’ve made a lot of friends here and so has Starling, my pup.”

No dog? No problem!

Fries says folks might be surprised by how many people who don’t own a dog who enjoy coming to Kanine Social. “It’s family-friendly. You don’t have to have a dog to come here. We have a lot of people who maybe their best friend has a dog and they just want to come to hang out. In the taproom, we have giant Jenga. We have cornhole. So it’s family-oriented in there but you’ve got to be 18 years or older to come inside the park. Maybe it’s happy hour and you don’t have a dog and maybe you’d just like to pet a dog while you unwind. A lot of people who don’t have a dog, see the dog of their choice while they’re here and they end up getting a dog.”

Kanine socializing is the main objective, but there’s a lot more to this business. Kanine Social also offers dog boarding, daycare and grooming. In the months to come an animal hospital and veterinarian service will also open.

“We just figured if we were boarding our dogs what would make us feel most comfortable. An animal hospital slash vet on site was the way to go. We’ll actually also be the only brand or facility in the nation to have the indoor park, the outside space, the taproom craft beer, doggie daycare, boarding a vet office on site.”

What's Next for Kanine Social

Now that all of the pieces are coming together at Kanine Social, the owners are considering their next step. They would like to open two or three more of these around the state of Florida. And from there the sky’s the limit.

Kanine Social is located at 580 College Street. The taproom opens at noon on weekdays and 10 in the morning on weekends. It closes at 9 on school nights and stays open until 10 on Friday and Saturday nights.

If you’re interested in daycare, prices range from $25 for a half-day to $35 for a full day. Longer care packages are also available. There is a $10 first visit temperament test to make sure your dog will get along with the other dogs.

If you would like to learn more about Kanine Social visit their website at www.KanineSocial.com. You can also call them at 904-712-6363.

Tags: Local Spotlight
Back to Blog

What Credit Union Business Accounts are Best for Small Business?

In this blog, we'll talk about credit union business accounts. We'll look at what they have to...
Read More