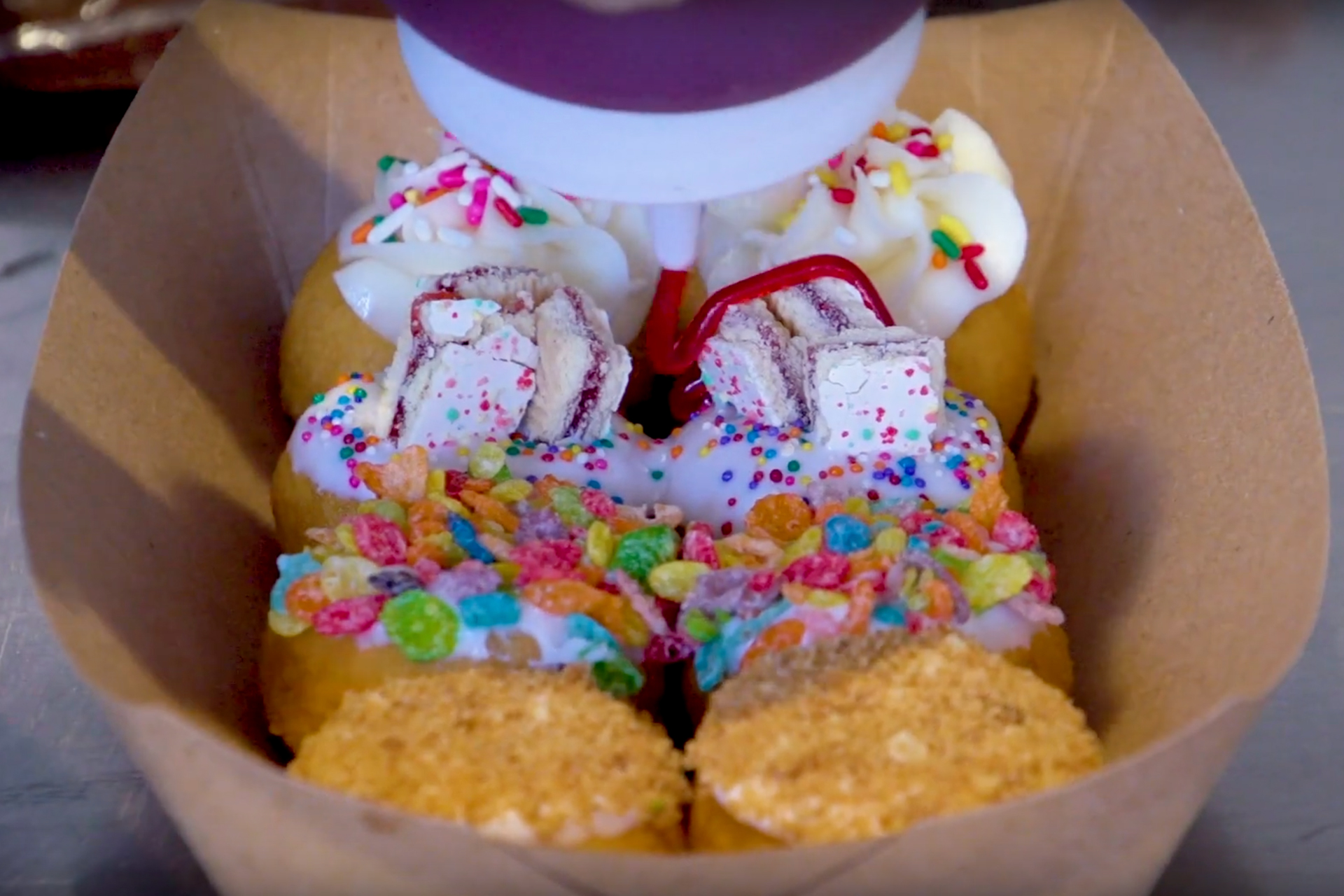 Brooke and Chase Sams grew up in the Jacksonville area, but it was their frequent trips to Seattle visiting family and friends, that changed the flavor of their Duval lives.

"My wife and I were going out to Seattle a lot and kind of fell in love with the idea of a donut shop," explains Chase Sams. "We saw that Jacksonville could use something that was more than just a regular donut shop. More like an experience when you come in town."

On the surface, the Sams didn't look like the perfect fit to become donut shop owners. Chase owned a Jacksonville construction business, and Brooke worked in commercial real estate. But Brooke did have that experience working at a bakery during college. And Chase did have that experience building things. Why not build and maintain donut shops. And they also had that desire to make it happen.

"We started making donuts in our house when the kids went to bed — started drawing up plans, drawing up what we wanted to do. We sold the other company, and we just went for it," says Chase.

Armed with renderings and recipes, the Sams started looking for the right spot to build their dreams. "We wanted something that was more than just a small pick up window. We wanted something that could incorporate the bus, which was my first car. And a lot of the things that are about us. So we wanted a bigger space. We want people to be able to sit back and relax and have a good time. Enjoy doing work or doing school or whatever you're doing. Meet people for the first time—first dates. We wanted to have good donuts and a good atmosphere," said Chase.

And not just any donuts. The Sams wanted to offer mini, almost bite-sized donuts that could be customized with confections.

"You don't get that many options with warm donuts unless you get there early, and they are just coming off the fryer. Or you come by when the hot sign's on. So we wanted to do that all the time. It's made to order. We change up our recipe. We change up our toppings. We do weekend specials. We have our tried and true recipes too."

The smaller size donuts are especially popular with moms and dads bringing in their small children.

"We wanted something that was going to be more family-friendly. With kids, we know how it is having a whole donut. You kind of feel guilty giving your three-year-old a full donut. With a smaller one, a kid gets to finish the whole thing. You get to try more flavors. It becomes more fun and creative, which is what my wife does. She does all the creative stuff with the toppings."

Finally, they found the perfect location in Jacksonville Beach at 1300 Beach Boulevard near the Jacksonville Beach post office. The unique shop includes a large open-air courtyard that leads to their large restaurant and donut bar. In addition to a wide variety of coffee flavors, they also serve expressos, lattes, draft beers, and wines.

So the Sams found the spot to make their dreams come true, but they needed a financial advisor and backer. That's when 121 Financial came into the picture.

"We took the money from the sale of my company and a couple of other things we had raised money with over the years and put it down, and 121 jumped right in and helped us fill in the gaps. They worked so good with us being a small business, being local. 121 just came in and really allowed us to be able to do this."

The Sams say, not only was 121's backing important but also 121's personalized service.
"There was a 24 hour period where three things needed to happen, and funding was one of them. We contracted our branch commercial officer, and within 24 hours, we had approval. We were on our way to signing paper. It was super quick and so easy. Everyone has been so great to us. They've been super flexible, wanting us to succeed."

The relationship has paid off for the Sams and for the community. Mini Bar Donuts have become big supporters of a number of local causes.

"We do a lot of stuff with kids because it's a very kid-friendly and we have kids too, so we do a lot of stuff with Nemours Children's Clinic. We do fundraising and events with them. We also do work with a local cancer research group, the Kate Amato Foundation. We do a lot of work with Yoga for Change. They go into prisons and do yoga to release stress. We've done stuff for the police, fire, and K9s for Warriors. Anytime you're able to lug into the community, help in the community, we're going to be there. "

That giving back to the community is also baked into the building design. That distinctive bus is an exact replica of the bus Chase's dad helped him buy and repair when he turned 15. "He said well, I want you to be able to repair it. So we picked up a bus on the Westside of Jacksonville, repaired it, and it's one of those things that whenever I walk in the shop and see the bus, I think of my dad. That's a big reason I'm able to build things with my hands. And the kids love playing on it."

Like the bus, the donut shop Chase has helped build is running nicely. The Mini Bar Donut shop has been open for almost two years now. Business has been good. In fact, they've been so popular; the Sams are preparing to open a second location in the Towne Center area.

"So we kind of picked a central location which is the town center to really make a stake right there and kind of branch out. We will be able to serve more of the community and get our products in more people's hands."

While the Sams would love to see their concept expand outside of the Jacksonville area, for now, they are content with just two stores. Any expansion has to ensure a new shop maintains a comfortable feel unique to that community. The Mini Bar is a kind of custom meeting place to eat custom donuts. And yes, there will be a VW van in that shop too.

"We're just kind of doing one step at a time," says Sams. "The next step is getting number two open. After that, who knows."

Tags: Local Spotlight
Back to Blog

In this blog, we'll share with you our conversation with Jacksonville's Jumbo Shrimp and their...
Read More

Kicks for Kids Is Back! Help Local Youth Start the School Year in Style

Better late than never! After a little delay, the The Kicks for the Kids Shoe Drive is back to...
Read More

121 Financial Credit Union is expanding hours of operation for all our branch lobbies and drive...
Read More